We had a lovely Fourth of July followed by a great long weekend, all wrapped up with a nasty stomach bug Saturday night! Dave started it, up and miserable all night long. We thought maybe it was food poisoning, but then Tess followed his lead immediately after breakfast. Let’s just say it inspired a lot of baths, laundry and chicken noodle soup. (I want to Lysol the whole house.)

Tess felt so awful that she curled up on one parent or the other all day long. She also learned to puke in a bucket – a milestone I really can’t celebrate. How well can you care for a patient that can’t tell you what’s wrong and doesn’t know enough to lean over before getting sick? (She actually threw up while sleeping, which must have horrified her as much as it did me!) How do you let her know that it will get better soon? Tess is in this funny “almost a toddler but still a baby” phase, and we felt that dramatically today. On a happier note, we got serious snuggles in – something Tess often feels will slow her down!

Fortunately, this was a short-run bug. Everyone seems to have tolerated solids and liquids by the end of the day, so we’re at least going into the week in one piece. 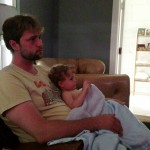 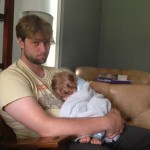 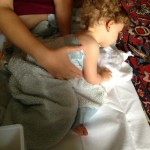 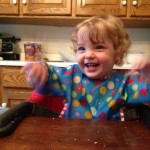