Tess nearly broke one of the new sitters on Friday with the whole teething thing. Molars are terrifying. Dave’s car broke down so he had to leave said new sitter alone with our little people sooner than expected, and to have a molar coming in on the first day is just plain unfair. This woman has experience with older kids, and when we hired her, it was with the assumption that I’d be working in the house for her first few days and could show her the ropes. No such luck. Tess terrorized because she was in pain, Dave’s truncated directions didn’t cover everything, and he got phone calls all day. All good questions though! Tess and the sitter were troopers, and Dave kept me in the dark – so all’s well that ends well! That ending, yet again, due to a perfectly-timed Sassy visit. 🙂 So the nanny situation seems to be under control temporarily.

As an aside, Tess’ new favorite foods? Rhubarb and black olives. This child leaves me speechless.

After a wildly coordinated (and successful!) week of crazy trains and training and switching roles, we enjoyed a fantastic weekend at home. We used Saturday as

prepare for round 2 of 5 am mornings

, which meant groceries and errands and cleaning and planning. Dave and I tag-teamed with the kids. We even snuck out Saturday night for a friend’s birthday while Friday’s sitter came for another go-round. We’re so glad we did, as she got to see our kids the way they normally are. Her reaction? Relief! Mine followed hers.

Tess’ reaction to the week became clear by Sunday. Whichever parent she was latched onto did not satisfy, so she’d cling to one and call the other. We obliged, passing her back and forth all weekend and giving her tons of time. She discovered airplanes Sunday while we hung out in the yard, and watching her eyes get huge and her mouth make that

was hysterical. I loved that suddenly any motor sound made her head swivel back, scanning the skies. The Air Show will be a riot this year.

Her other discovery, the phrase

, we are less enamored with. She started it with Sassy’s jewelry, and I can’t blame her for that. If I could get away with that line, I’d try it! Mom had on a polar bear necklace, so kiddo magic. By Sunday she’d moved on to food. My food. I’ve been sharing, and now wonder if that’s a bad thing to teach our tiny conqueror. We’ll see.

Tess also figured out how much more she has to throw: everything in her crib, food from lunch, toys from her play yard – you name it. She also figured out how to get out of her sleep sack, which makes us nervous the diaper may be next. It was the only thing left on her or in the crib after weekend naptimes. Apparently she also managed to escape the changing table belt on Thursday. Red alert!

Throwing stuff and escape artistry are expected; Dave and I didn’t raise an eyebrow. That doesn’t mean we like it though. Suddenly she seems to find the play yard time-outs seem to be more attractive, and we’re wondering if she’s getting in trouble on purpose to go hang out in the other room. Dave’s plan is to build a penalty box not filled with toys. Hmm. We’ll see.

So we recharged, and I’m back on the train. Another week of intense learning! We’ll see how this one goes. 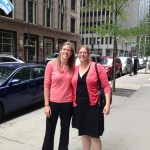 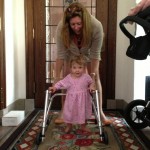 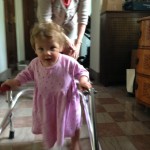 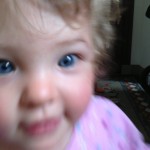 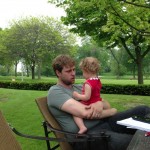 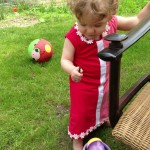 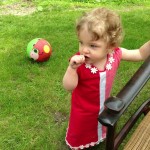 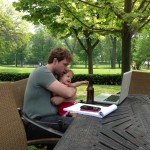 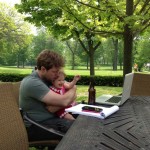