K had an appointment today and it appears Deuce has decided to hang out for the time being. The contractions have petered out and he’s big and has a great heartbeat. Yay! Maybe we’ll all get to go to Sabine’s wedding together after all? A girl can dream.

On the “less great” news front, we finally figured out what was going on with the due date swings. Apparently, one of the people treating K explained that all babies born at or after 37 weeks are considered term, that accurately predicting a birth date is part science, part law of averages – so as baby deuce is so big, he’s probably coming around week 37 rather than week 41. This conversation seems to be the first stop after stopping preterm labor, since they want to stop the poor hospitalized moms from having heart attacks. Somewhere along the line, that got interpreted as an adjusted due date rather than a prediction. We’re now less confused – as due dates don’t normally shift that dramatically – but disappointed, as it means our 34-week celebration was about 3 weeks premature (pun intended). So we’re resetting the clock and taking a deep breath. Sigh. This puts Deuce in the category just under the magical 34-week mark. His outcomes are still exponentially better than Tess’ and his decision to keep his current crib gives us hope. Still: my request for boring and predictable stands. I’ve had enough excitement in the last few years to tide me over for a while. Deuce doesn’t need to try so hard to stand out! Frankly, a full-term, roly-poly boy would be unique in our experience.

I’m starting to believe people should only have children when they’re young and too stupid to realize how fragile and terrifying pregnancy really is. I had a refreshing chat with another mom this weekend, who actually admitted she was scared all the way through all of her pregnancies. Now there’s some honesty! In my 20s, my mental take on pregnancy was the rosy image of a burgeoning belly and that pregnancy glow. My expecting friends weren’t talking about miscarriage or preterm contractions; they were dreaming about onesies and that new baby smell. The success of their pregnancies was never in doubt. Now, I worry for all of my pregnant friends. I unfortunately am well aware of the fragility these nine months of incubation entail. I sometimes think it’s easier to adopt, but then remember someone’s out in the world walking around with our child – we can’t check on, help, care for, or in any way take care of this child until months from now. So if I seem on edge, I am.

It’s raining here, in January. This creates a feeling of discontent in almost everyone I’ve spoken with today, aside from the guys working on the outside of the house! It gives a false sense of spring, which will make tonight’s snow a little frustrating. Still, who wouldn’t want snow?! I’m hoping it will stay warm enough that we can take Tess out to explore it a little. I can’t wait to see the look on her face when she sticks a hand in it! Speaking of Tess, she rocked her therapy appointment today. She’s rolling like crazy, more balanced in her responses, and starting to pick things up with both hands. The therapist seemed quite pleased, as was I! Unfortunately, we ended our evening with Tess sobbing hysterically, unconsolable. We’re not sure what’s wrong, but she is clearly communicating total and debilitating misery. Here’s hoping a bottle and a dose of Tylenol support our snuggles and soothe her. 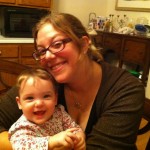 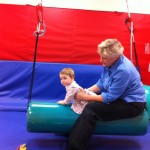 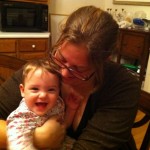 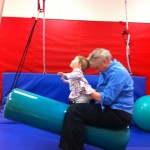 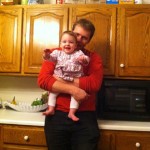 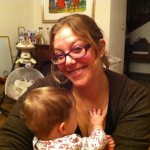