It’s been a while coming, but Dave and I had back-to-back business trips this week. I was in California Monday-Tuesday, and get home late in time to take over when he leaves early Wednesday. Southwest Airlines severely frustrated me, as I was at the gate ready for standby on an open flight, but they wouldn’t let me on without paying them the equivalent of another ticket. It made the difference between seeing the kids and not, which was heartbreaking. Not because I’d been gone so long, but because we’ve had so many comings and goings, I wanted to make this as painless as possible – especially for Tess. I can hear you all now –

Relax! Where’s the woman who ran off to China for two weeks?

The thing is, at that point Tess couldn’t care less. Now, she’s super sensitive to our presence. She’s even woken up a few times demanding to know if mommy and daddy are in the house. She’s so upset, it breaks my heart when I can assure her we’re there.

All that aside, I’m proud of our ability to coordinate those trips. We’ve worked hard to find jobs that allow us the flexibility to balance our schedules, and we both feel lucky to be ambitious and still put our kids first. We recognize not everyone has that freedom. The project I was traveling for means a lot to me, and Dave’s contact with his Chicago coworkers means a lot to him.

We spent the weekend before the handoff reinforcing our guidelines for Tess and verbalizing them for Flamine. We had a realization: our best-case parenting scenario relies upon Tess or Remy making a choice, not us fighting a war. We just sometimes forget that in our frustration. For example, Tess will ‘brush’ her teeth, but thrashes when we try to complete the job. New rule? Let us help, get a story. Don’t let us help, straight to bed.

I survived the first leg, and Dave’s currently in Chicago. I foolishly decided today was a good time to draw the line against the constant screaming. This ended with me frustrated and Tess giving up! The kids ate tons of the homemade meal I produced, Flamine went out with a new friend, and Tess shocked me by choosing the big girl bed tonight and being the sweetest, cuddliest, most charming version of herself I’ve had the great fortune to see. Poor Dave. Greatest transformation day on record and he’s out of town! We’ll see what the night and morning bring though… 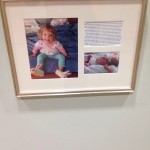 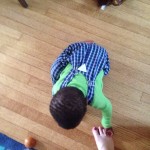 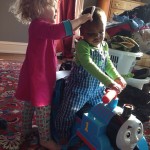 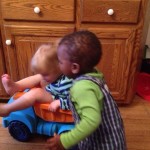 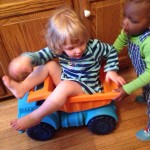 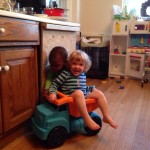 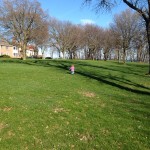 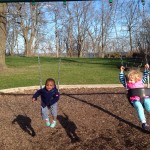 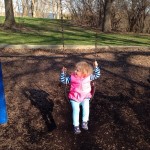 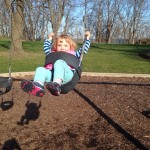 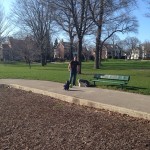 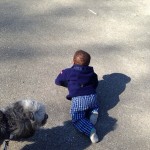 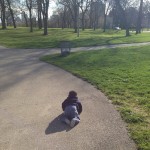 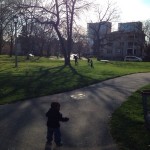 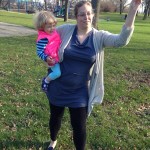 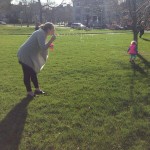 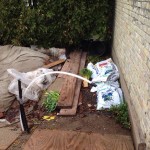