I have to pause and brag for a minute. My husband is such a good listener and observer that he has left me speechless at times with his insights into my core beliefs and dreams. He will perfectly express some fundamental feeling of mine that I never managed to duly pin down, leaving me opening and closing my mouth like a guppy and only able to say, “Um, yes.” All I have to say is if that skill translates to his fathering, Tess will feel incredibly listened to and understood! It’s like he can sum me up in shorthand.

Sunday was everything a Sunday should be: awesomely relaxing, sunny, breezy and fun. That’s saying something, because we both worked all afternoon! We laughed all weekend at a turkey that appears to have moved into our park. Here’s hoping he’ll be around in November! Also, we got to see the cheesy in a good way Neil Diamond Sunday night with even more friends – and another friend stayed with Tess so we could go! Love our people. The whirlwind of social activities this weekend is not typical, but it was fun as a change of pace.

It left us with excruciating whiplash for Monday morning though. We just aren’t that cool anymore. Tess was a little off her usual routine last night – either that I did a terrible job taking notes from the fabulous Kristin, who gave us the beautiful gift of a night on the town while she took care of the bug! So our great socializing was not capped off with a ton of sleep.

We woke up to the sounds of the temporary kitchen going up. I may have hovered a bit, sneaking things into cabinets and tidying up before they’d even finished the install. The idea of even temporary nesting is like catnip. Two bathrooms to go and our truncated house will be our own private haven! Love it. Trying to work in this zoo was a little beyond me; I’m glad I got some hours in yesterday so I won’t be behind. I’m guessing Dave was quite relieved to run off to the office, despite his exhaustion!

Tess is getting better at grasping: my hair, our clothes, her stuffed animal binkies, even putting hands on her bottle while we feed her. She’s also getting to be such a good parent tracker that we tiptoe through her room now when she’s sleeping. Tess can seriously give her lungs a workout – and she’s not shy. We’ve decided she has more of an on/off switch than volume control. It makes it easy to know when she wakes up after a nap! Lots of napping on her part this morning, and hopefully an uneventful night for all of us.

We ended the evening with an organized and unplugged kitchen: acceptable. The old kitchen is well sealed off, so none of the construction will get anywhere near Tess. I was at a loss for what to cook in the microwave, and Dave had the brilliant idea to grill. So we sat on the deck eating grilled zucchini, steak and pineapple, watching the light fade. Tess was grumpy, but not even she can resist Dave’s “dance the baby” moves. Stella was happy to be back in her yard and was downright energetic, and Dave and I got to unwind. Despite the fact that this morning was so frantic I didn’t get a shower, I’m dusty and covered in spit up (we had a day), it was a beautiful evening. 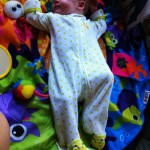 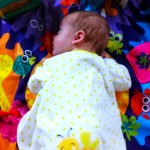 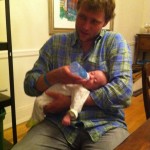 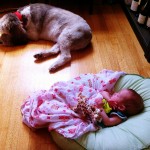 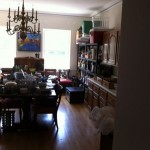 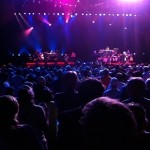 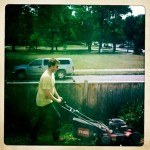