Our coverage of this week has been patchy due to lots of work projects on deadline and more social activities than we’re used to! It’s all good, but when night finally arrives we tumble into bed as quickly as possible. Tess may have picked up on our exhaustion, and has slept through the night the last 3 nights – over 7 hours each night. She’s been a bit crabbier than usual, which I think is due to the huge shift in schedule! She’s doubling some of her feeds – even passing the 200ml mark yesterday! (Good job, Dave.) To complicate things, our dog isn’t feeling well and needed an emergency vet run last night (again, good job Dave!) at the exact same time as our friends Frank and Joanie got in from Chicago. Never a dull moment.

We’re realizing that dinners and socializing can happen; you just have to be smarter. Â We’ve been freezing avocado as a Pinterest-inspired experiment, and it worked pretty well.Â We had Sarah and Will over Wednesday and made a super-easy summery meal: guac and chips; grilled tenderloin steaks, asparagus and grape tomatoes; corn maque choux (which I can eat every day, warm or cold! It’s like succotash without the beans); melon fresh from the farm; and sorbet with a dash of booze to round the evening out. None of that took long to organize, but it tasted great and let us enjoy their company instead of running around the kitchen. Here’s where it got smart: we used the tenderloin in mini sandwiches last night, and served all the veggies as cold salads. Frank and Joanie didn’t know when they’d get here, and it didn’t matter! We could maximize our work/animal hospital time, and when they got here, we just pulled everything out of the fridge. New parents can be taught.Â Getting to spend two nights this week with such good friends was wonderful. Our life under lockdown – which is almost over! – is pretty routine, and we were super happy to catch up with other adults in a non-work environment. I fear we may have come off as overeager puppies. We’ll have to pull ourselves together and try to act cooler next time. 🙂 Not that an act like that would fool anyone that knows us, but it’s good to practice.

On top of everything else this week, we’re in the home stretch on Tess’ adoption process. Our finalization hearing, which we won’t attend as we already spoke with the judge before leaving Salt Lake, will be September 24. Gotcha day is on the horizon! I worried that the 6-month waiting period would make me crazy, but we’ve been too busy and tired to get too worked up about it. Instead, it’s a quiet pleasure to look forward to. I should clarify what all of this means, as a number of people have looked confused at hearing the adoption isn’t done yet.

I’m being very specific here, as adoption of domestic older children works differently, and international adoption isÂ totally different. We haven’t done it, so we can’t speak about it. The most significant difference is in the US, infant birth parents choose the adoptive parents. This feels remarkably like online dating, in that each party gets a profile to consider, where suddenly grammar and hobbies take on an astronomical importance you never thought possible. In this instance, instead of steeling yourself to reach out to a stranger for an hour, both sides cross their fingers and leap into a lifetime commitment of monstrous emotional proportions based on a phone call, photo exchange or meeting. I say lifetime because, even if the adoption isn’t as open as ours is, the parents and child all have a lifetime bond – whether or not they communicate after the baby is born. The trust required takes your breath away. Maybe arranged marriage is a better corollary…

I don’t know if this is too complex or messy or what, but I figures a walkthrough might help some readers understand why Adoption Day, when Kat and Spencer let us become Tess’ parents, was so emotional and meaningful. We’re looking forward to finalization, but the major transition happened in March in the NICU. This is a looooong post! I hope it makes the adoption process a little easier to follow. Eventually, we’ll be doing it all over again and you’ll know the lingo! I’m off for lunch with Frank, Carla and Joanie. Tess and I will be strolling around the neighborhood with friends in the sunshine. What medical lockdown? 🙂 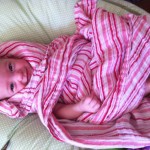 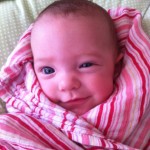 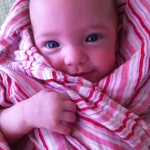 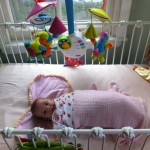 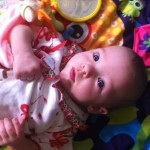 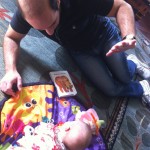 One thought on “Officially sleeping through the night…this week”