Have the au pair start by looking startled when a normally calm boy screams bloody murder on the slide. Then carry said screaming deadweight out of the park while trying to wrangle his put-out sister, who also wants a boo-boo. Snuggle injured boyo while letting his mom know something’s up. Watch with a straight face as she, with no medical background whatsoever, attempts to ascertain whether this is a big deal or not. When she offers jelly beans if he can take a step or two and he can’t, assume badness.

As mom, call the pediatrician’s office. When in doubt, they’ll tell you if you’re being an idiot one way or the other. When they say to come in, enthrone the wounded toddler in the stroller with no pants on and his leg up. Per their instructions, wander from clinic X-Rays to hospital X-Rays, as the wind blows or the techs shoo you. Hold boy down on X-Ray table with songs and promises of sugar. Wait.

Go back to the pediatrician. Listen, comforted, as she assertively demands they fit your toddler into the ortho clinic today. Watch her laugh as your son with the broken leg entertains himself by singing “The Itsy Bitsy Spider” exactly the way Tom Waits would. When in doubt, give the child with a broken leg pain killers. It’s gotta hurt.

Go home. Stuff child’s face with lunch and stop jealous sister from smacking him in the leg. Yell at her when she sneaks around you and does it anyway. Make kids hug. Send poorly autocorrected email to the boss, explaining why you’re not working. Agree to drive way pastÂ the Children’s Hospital near the house to be seen today at the Ortho Clinic.

Get boy ensconced in the car. Enjoy being attacked when you offer the cuddler his bear, Flute. (What? He named him – not me!) Curse (mostly) inwardly when massively thwarted by the universe with impossible timelines (It’s only a 20-minute drive to Delafield!) and summer construction on all highways and roads heading west. After an hour in the car, lost and betrayed by GPS, thank the stars that at least the wounded one is getting a solid nap.

Due to tardiness, don’t unfold the stroller when you arrive; lug all 35 pounds of sleepy toddler through the hospital, because that 90 seconds will really make a difference to the clinic employees waiting for you. Nod knowingly at the squiggly lines on the X-ray while they explain exactly why your kid can’t bear weight on his leg. Try not to think about the upcoming hiking plans in southern Utah. We can make a cast work, right?

Chat about how disgusting casts are with the person putting one on your child. Really don’t think about what Tess and Remy will stick in there over the course of a month, or what will get on that cast every morning when Remy has peed through his diaper.

Feel ridiculous relief that your son chooses red over purple. It doesn’t really matter, but a month of purple would be long when the macho men in my life would give me grief all the way through. What’s wrong with purple, anyway? Maybe it would be a nice statement. Â He picks red.

Be grateful you parked right next to the door for once, as the 35 pounds has become 40 or so, and the toddler refuses to hang onto your hip in any way, shape or form. Load the heavy, sleepy, thirsty, pained boy into his seat and set out for home, with visions of varying him around for a week dancing in your head. Enjoy the screeching fury of the perfectly healthy 3-year old as she attempts to give herself an equally thrilling injury. Snuggle boy down on the couch with his favorite truck books and enjoy his beaming smile. Go figure – he’s the happiest one in the room.

Advise daddy to admire Tess’ hairdo and lip gloss from 9am this morning, long gone. Take a glass of rosÃ© out to the front stoop and sit in silence for just a minute! Before going back in and snuggling with both kids, watching “petit ours brun” do his thing until bedtime. Magically, the ballerina starts giggling and puts on a show for the fireman, who rolls over to hug his maman every time the little bear on tv does the same. End the night happy, with peaceful babes passed out within minutes, cast or no. 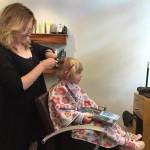 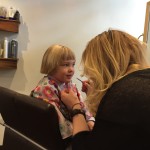 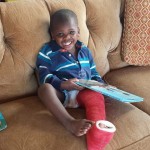 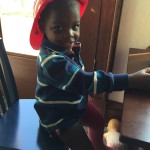 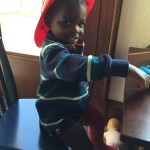 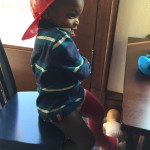 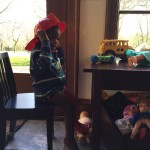