Yikes! Tess got a fever sunday night – her first significant one since we left the NICU. I have to admit, it freaked me out. Then it was gone in the morning, and I mentally rolled my eyes at my paranoia. Until it came back higher after her nap: 102.3.

I’m the kind of person who would normally know what to do in this situation. I’d have a list or criteria of when to call the doctor or something! Instead I canceled therapy so we wouldn’t get all the other compromised kids sick, and called the pediatrician’s triage nurse for advice. She calmed me down, but it still stinks.

Tess is miserable: fussy, thirsty, sick of snuggles and her toys, hot forehead and freezing hands and feet – just sick. She’s babbling in misery, which stinks because she’s clearly got plenty to say and just doesn’t have the words. She wakes up just long enough to go through a bottle of Pedialyte and a diaper change, then goes back to bed. She’s given up on the sippy cup and didn’t even fight me on the Tylenol, which is normally a battle of wills. Poor kiddo! My focus right now is on taking care of her without getting Remy sick – so hand washing out the wazoo. Do I have a prayer?!

It poured yesterday, thunderstorms and gushing gutters. Tess was up and down every hour, Remy was his usually nocturnal self, and we alternated quiet and crazy. It feels reminiscent of our medical lockdown, to be honest. What a weird way to re-experience that! In expectation of maternity leave with both kids, I imagined strolls through the park with other moms, swings and sitting under trees. Thunderstorms and sick kids are maybe a little more realistic.

Then we had an all-nighter, alternating babies. It hurts to be up every hour all night long with screaming, miserable kids. Your heart AND head hurt. 🙁 Dave overslept his alarm and bolted, and I got to sleep in a bit but woke to Tess howling. We’ll see how the day goes! 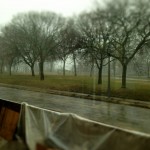 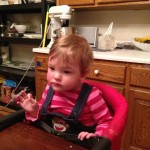 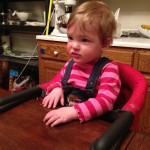 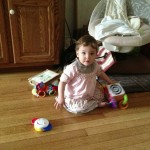