Sometimes feeding Tess feels like feeding a gator or some other wild animal. She wakes ravenous, literally howling for food. She throws her head from side to side, trying to find the bottle we are pointing right at her mouth to begin with. She plays with her food, gnashing her gums on the nipple and thrashing from head to toe (usually to relieve gas, but it’s some wild posturing). Once she settles in, she eats like a normal baby for a while, still forgetting to breathe from time to time – requiring us to pay attention and pull it away from her so she can take a huge sucking breath and then pant, rather than gag and go quiet for what feels like a hundred years. Then she’ll flail a bit until you burp her, flail and cry some more until you insert the nipple just right…and then she’ll smile this quirky little Mona Lisa smile that makes us feel like she’s been playing us the whole time.

Eventually, she falls asleep with the bottle in her mouth. Then we have to wake her up by burping her or changing her diaper vigorously. The problem is that during the whole scene described above she’s eaten maybe 45 ml. A shot of formula, if you will. The second half is usually equally as productive and equally as active, leaving us with the constant suspicion that we’re being outsmarted. as a grand finale, she’ll sneak in some really late but big burps and every once in a while, will impersonate a volcano – a move she shared with mom last night. This isn’t spitup – it’s an eruption.

In order to contradict the description above, Tess was an absolute angel today. She was smiley when awake, slept on cue during an important meeting, ate proper amounts of food, and didn’t even cry during tummy time! I was very impressed. To crown it off, she skipped the witching hour. That’s right; we took a contemplative stroll around 5pm and she didn’t utter a peep. Amazing. So despite the normal feeding shenanigans, today our daughter really is outperforming her peers. *smirk* (Just wait – she’ll nail us at 2am.)

At 5, the tile guy called to say his son has croup, and ask if he could still work at the house. So nice! The doctor said he wasn’t contagious anymore, so the 3-ft rule and purell will rule the house tomorrow. I’m so happy that the people here everyday are so thoughtful and cool. We rounded the night up with a fun family dinner, where Caela held Tess for the first time. Then home for some last touches on a work project and SLEEP! It’s one of those days where the deprivation hits hard. Fortunately, mom worked grandma magic on Tess, so I think it’ll be a good night of sleep for all. 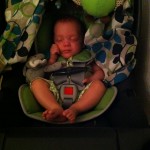 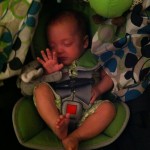 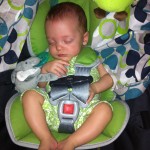 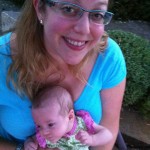 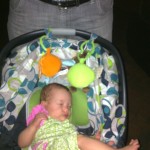 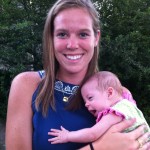 One thought on “Feeding Tess”