Today started with a jammed printer and spilled pickle juice. (Pickle juice and bok choy do not belong together, ever.) Remy and Tess were crabby and got up early. Things were looking grim.

Then Tess did something incredible. She loomed over Remy, took his binkie (nothing new yet), and tried to put it in his mouth. She did not do this in a

Stop being so loud! Plug the noise hole dude!

Hmm. Mom and dad do this when you’re making noise…

way. She seemed slightly unsure of herself, and I doubt we reassured her by sitting there staring at her with our jaws on the floor. We spoke in hushed tones like we’d spook the wild animal! Talk about a Father’s Day miracle.

I took the kids to my parents’ house for some swimming in the pond with their cousins. Tess was delighted with the swimming, and Remy was not. That’s okay. Dave got some sanity time, and sounded as guilty about it as I did going to Chicago. We have to remember that just because we LOVE parenting does not mean we don’t need a break sometimes.

Kids don’t ease gently into our lives. There’s no gentle light, soothing music or peaceful sleep. There’s squalling, loud beeping toys, blocks underfoot, foul diaper destruction, and few moments of rest that feel like the eye of the storm. You’re grateful for the silence that rings in your ears, but you know it’s temporary. Despite all that, the little monsters own you as a parent. Tess and Remy are our world! We were reflecting that, as a non-parent, the amount of time and crap (literally) that goes into the parenting-career-mortgage lifestyle seems soul-sucking and frightful. Yet now that we’re in the thick of it, we’re the happiest we’ve ever been.

So today we reflect on fathers and fatherhood. Last year at this time, we were enjoying Tess’ first family dinner. No one could hold her and we were nervous, but she was home. This year, she babbled at her cousin over shovels while they ate sand. That’s thanks to many dads. Spencer, who genetically made Tess who she is; who gave her heart and spirit and wrote her beautiful music. Dave, who tackles Tess and her brother like a pro: bathes them, feeds them, tickles them, snuggles them, carries them and built their baby penalty box. Grandpa Dan, who put Tess through her therapy paces and kept her company on the beach when she went from only to older – and that on top of feeding and snuggling Remy every chance he gets. Papa Mike, who brings out the shyest, sweetest smile on both kids’ faces, who tickles them into gales of laughter and can sit quietly and companionably with them at the perfect moment. All of these dads love Tess and Remy, and that’s not even all of the dads involved. What amazes me most about dads and future dads is their ability to give heart to any kid they love, whether their title is uncle, birth dad or friend. I know we’re lucky, but I don’t think we’re special. So while we’re headed to the gathering of the dads, we send our love out the the ones who can’t be here or are performing their fatherly duties in less official capacities. You guys have a special touch, and all of our kids benefit from being loved by you. Thanks and love all around from the rest of us! 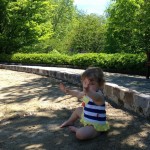 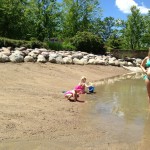 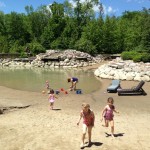 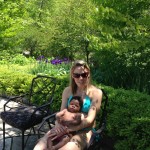 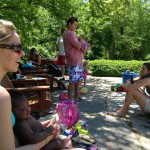 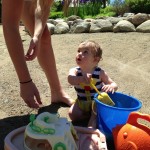 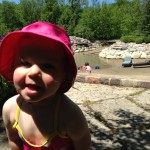 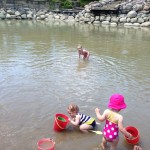 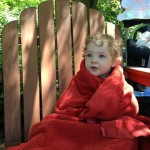 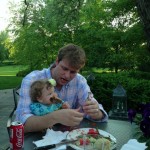 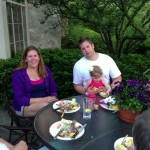 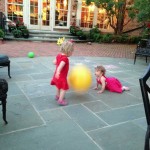 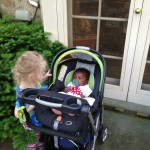