We’ve been trying really hard to transition Remy to sleepsacks over swaddling and get him to sleep longer night stretches. He was doing great for a while! I asked the pediatrician if we should be getting up with him at this point when he cries at 2am, and her blunt as always response was,

This month, he’s been our littlest roommate so Estelle has a place to sleep, so it mattered more.

Enough said. We got serious – the back rubbing instead of picking up, no more bottles between 9pm and 8am (pediatrician:

He’s certainly not fading away!

and that only after giving him 20-30 minutes to self-soothe (he doesn’t). This week, he’s had more trouble than usual connecting his sleep cycles, so we’ve had to get up, start the sound machine and pat his back for a few minutes so we could sleep. Yes – at 4:30 in the morning we can only be called weak-willed. We give in. And we saw a creeping return to the middle of the night

I want my parents!

routine that we had not missed at all. We noticed; we worried; we became exhausted again.

So two nights ago, Remy screamed and sobbed for hours. Hours. We didn’t intend for this to happen – we just decided to be strong for once and see if he could get himself back to sleep. We tiptoed over to make sure nothing was significantly wrong, then cowered, blinking in the dark, rooting for him to pull it together. He started at 11:30 and just. kept. going. Dave and I lay in bed, wincing and staring at the ceiling. At times we’d doze, but got no relief from the sobbing, yelling and choking.

After an hour or so, we’d give in; go through the sound machine, back pats and calm him down a bit. He’d sleep; we’d fade almost to sleep – and the whimpering would start again. He’d eaten a ton the day before, had pooped, his skin looked good (I always wonder if he’s itchy when his skin gets dry), he was warm, we’d gone through the normal routine, he has no teeth anywhere to be seen – and yet he remained inconsolable.

At 2am, we caved and gave him a diaper change, held him and rocked him to sleep. We felt shame and relief. We tucked him in, feasted on silence in the dark, and fell into a desperate sleep. He was up again 20 minutes later. We then completely abandoned all parenting principles and made him a bottle. We fed him, rocked him, held him – you name it. Finally, he caved and passed out. Tuesday hurt a lot. Tuesday Dave left for Chicago. I approached bedtime alone with serious trepidation.

As a slightly seasoned parent who reads too much, I decided to trust the experts over my gut: we went for an earlier bedtime. Here’s the magical part! It worked. We normally wait until he looks sleepy to tuck him in. he does not usually go softly into slumber; there’s a lot of yelling and crying and kicking. Last night, I put him down when Tess went down. He didn’t look tired at all. Still, instead of sobbing for 30 minutes before passing out, he talked to himself for ten minutes and slipped into sweet sleep. Magic! Not mine, but amazing in its effectiveness.

So there I am, enjoying a tiny yet critical larenting victory. Imagine my horror when I heard Tess in hysterics at 11:30pm. Noooo! Tess is tricky; she usually falls back to sleep faster if we leave her alone rather than going in to comfort her. She’s so independent that seeing a parent tends to stoke the flames more than calm the beast. I waited outside her door for a few minutes, but she showed no signs of slowing down. I took a breath and opened the door. For once, intervention helped. Diaper change (thanks to teeth, her butt’s so red, she looks like a monkey at the zoo), a little pain killer (and she was so pissed, she’d only let me give her half), then cuddling.

Let’s be clear: Tess isn’t a cuddler at this point. She wants to run around, celebrate her freedom, and get into everything she possibly can before we catch her. But I went with it. We talked about the chandeliers in her room (One was on, one was off – fascinating mommy!), her bear, we listened to how quiet the house was and discussed why she was awake when everyone was sleeping, and then I poured her limp little body into her crib, where she – for once! – didn’t revolt in fury, but snuggled back down and stayed there until morning. Five minutes and comfort successfully administered! I tiptoed out the door with a smile on my face.

Back to Remy. We skipped 2am, 4am and 6am. He woke up at the first strike of 7, which I consider perfectly civilized. To top off his elegant wake up choice, he hung out in bed, chatting happily in the dark. Serious relief people!

So in case you were wondering, we have definitely not reached the ‘taking sleep for granted’ part of the show yet.

What we have reached is the return to normal sleeping arrangements! Remy and Estelle are now both in their own spaces – missing doors and other luxuries, but we’re all settled in. It feels weird to have taken over the whole house, and to have our bedroom back. It feels like a lot of openness. I’m trying to capture that feeling so, as it fills up with toys and baby supplies and books and chaos, I know the space and sunshine and quiet remains in there somewhere.

To crown off our weekend, Tess slammed her face into Dave’s chair arm while ‘beeing’ around. For those unfamiliar with this technique, she roams around the house and people on a predetermined and very unclear trajectory. We have to be very aware of anything brushing against our legs, as if we turn too fast, she goes flying. Yikes. Needless to say, this fat lip was inevitable, despite our best efforts. She scared the crap out of us though! Blood everywhere, sobbing, and – this being Tess – denying us access to her mouth to assess the damage. And this in addition to last week’s stomach bug! We at least had a laugh explaining the two versions of “cheeks” to Estelle. All of Tess’ cheeks were red! 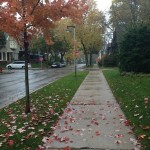 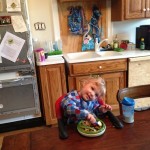 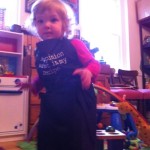 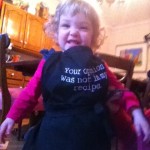 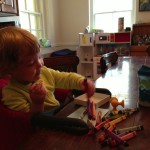 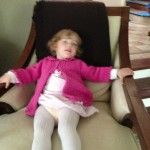 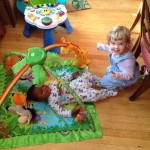 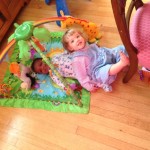 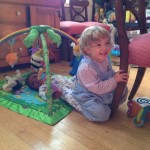 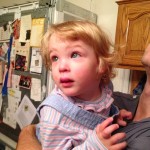 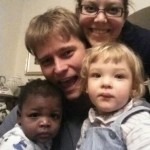