Well, we woke up yesterday at 4AM to the police pounding on our door: some girl coming home from work fell asleep and crashed into both of our cars. She’s okay; our vehicles are not. Dave thinks mine is totaled from underneath, which is so frustrating – it hardly looks damaged, but the whole front of her car accordioned under the front of mine. There are dangly bits that are quite large and important-looking. Ouch. Both of us were relieved no one was hurt, and impressed at how safe we’d be in our vehicles (extreme baby testing anyone?!) had we been in either vehicle. I have since moved on to mourning my favorite car. Shockingly, we didn’t wake up to the sound of a three-car crash directly outside our bedroom window. I’m a little in awe of what we slept through! Tess, thoughtful infant that she is, slept 13 hours last night so we at least got to go back to bed.

Yet again, I got to fully experience how awesome our neighbors are. Some called to make sure we knew what happened or see how we were (can’t move the cars til Monday – quite the spectacle!), and one ex-cop actually toured the neighborhood looking for damaged cars in case it was a hit and run. Dave’s mechanic buddy came by to tell us how screwed the cars were in person (Dave’s may be salveageable; mine, not so much – words like broken axle and radiator broke my heart. Apparently the damage doesn’t extend to the frame at all, but he feels no insurance company worth its salt would invest in the repairs). Dave wrote

on my car just to let everyone know we we’re in the loop, which made us laugh and startles passers-by all day.

Dave and I had a horrible Saturday – I won’t lie. The insurance company was only open part of the day, sent us to two closed rental car locations, the location we got to didn’t have the cars we wanted to rent and test drive, Colin ended up driving Tess in circles for 45 minutes (!) while they checked us out, I was suddenly mid-day really pissed about losing my car and having to research replacements and was researching very grumpily (generous), people were calling…and when we stepped out for a bite at 1 to calm down, we ended up in a restaurant with a hungry baby and no bottle. I assure you, as Dave sprinted home and I frantically tried to keep Tess from exploding all the way alone in the small restaurant, it was hard to determine who was the most frustrated of the three of us.

Still, at the end of the day we all curled up in front of the fire. We had tons of car options to talk about, a glass of wine in hand, and Tess gumming her toys between us, all smiles. This is pretty much bliss. Then, a knock at the door: Max and Patty and Liam! Our domestic scene improved dramatically. It’s so nice to know that other kids are already attached to Tess despite her slow start ( they came by because Liam started saying

Cutest 1 year-old ever.) We all snuggled in around the fire and just hung out, which was apparently exactly what the doctor ordered. We lost our cars and our Saturday, but the important stuff is still intact. 🙂 Also, Tess keeps quite the calm head in a crisis. 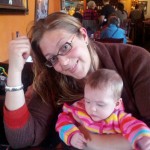 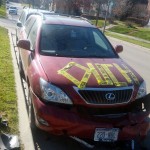 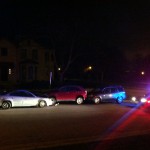 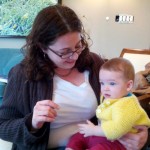 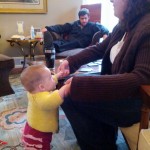 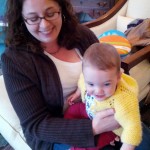 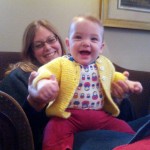 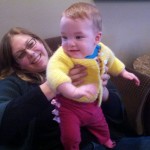 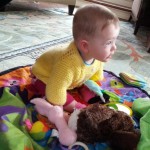