Let me start by saying we love, love, love all of our children to the point of pain. When you don’t know if you can ever have children, that sort of blessing stays with you, even though it sometimes feels maudlin. To be honest, the ferocious mama bear came out pretty much upon meeting each kid, which is a little scary considering that’s not necessarily when things are official. We’ve been very lucky in that respect, for which I’m grateful.

Lilou is the only child we adopted a little bit older. Her mom is very attached to her, and that was mutual. For our first few months together, we almost felt like we were taking care of Amy’s child. Because that mother â€“ daughter relationship existed and was so firmly entrenched, it took a little longer for us to truly feel like Lilou’s parents. It occurred to me tonight that sometime between Thanksgiving and now, she has become 100% part of the family in the most organic way possible.

I remember wondering if she could climb stairs, if she’d eat spicy food, if the drama queen was her nature or if she would learn how to dust herself off watching her siblings after a small spill. We didn’t know if she would respond better to us ignoring her for a minute and letting her calm down on her own, or if she needed snuggles immediately to feel safe. We didn’t know if she’d appreciate all of the hugs and holding extended family brings to the table, or if she’d need more time with just us. Would she prefer books or dolls or trucks? Does she get hot when she sleeps, or cold? Does she listen when you say no, or run the other way? Or do it again? For the record, she runs the other way giggling her head off!

Over the last months, we learned all of the answers to those questions. We know she doesn’t like spicy food, that she’ll do almost anything to be like her older siblings, and that she loves dolls and books. She also loves stealing Remy’s toys, so in a way she loves trucks too. She loves kisses! And as we learned the answers, she melted into the big pot of soup we call family.

At the beginning, we felt so much guilt anytime she cried. Amy gave up so much to let her join our family that it felt inappropriate to let Lilou be unhappy. Besides, she was going through so much! At a certain point though, babies and toddlers cry. We had to make a concerted effort to treat her the way we treat the other kids: to wait and see if she could handle a mini crisis on her own before jumping into save her, to serve her one meal and give her an extra large portion of the next if she didn’t like the first one, to teach her that she can’t steal Remy’s toys but that she can have dolls (or trucks) of her own.

We know now that when she’s done eating and bored, she will run her hands luxuriantly through her hair, getting her leftovers everywhere to shock us into releasing her from her high chair. We know she loves to play with the buttons on the lullaby machine in her bed, and does not need us to do this for her. We know that Tess and Remy will spot her every time she tries to come downstairs, even though she can totally do that by herself. And she lets them and loves every minute of their attention. We know that she adores dogs, and considers Stella one of her best friends in the world. In learning all of these answers and in getting to know her, she became truly one of us.

When Tess steals a snack for her and her brother, she also steals one for Lilou. When Remy runs into her when doing laps around the counter, he hugs her instinctively and kisses her on the head. He knows she won’t cry if he takes a minute with her. We know that when we tuck her in at night, she’ll snuggle down and laugh at the luxury of being in bed when she’s tired.

As I look back at photos from all of last year, I’m stunned to see the ones from our first week home. The picture of Tess meeting her sister will remain one of my favorite all-time photographs for the rest of my life. So we watch Tess and Remy and Lilou play peekaboo through dinner. When Remy tells us what Lilou wants, we thank him for being so thoughtful. Besides, he’s usually right! And we revel in how beautiful our family has come together, and how momentous 2015 really was. It’s amazing what a yearful of pictures can show you.

Today I woke up so tired and nervous I could barely keep coffee down- not because today would be terrifying, but because so much is going on. At 4pm, a judge declared Leah an official Oplinger, giving us closure to five uninterrupted years of adoption roller coaster. Still, the true moment of transition came when Amy, Dave and I created that fragile pact of transferred parenthood last July. How could a stranger, a charming judge who kept waving hi at Lilou but a stranger nonetheless, have more impact on this relationship than two mothers sharing a heart? So we’re officially and joyfully a family of six today – but that transition happened in a more profound way over the course of the last nine months. We loved her instantly, she grew into our family day by day, and now she’s legally part of the family. But those first moments in a restaurant and on a beach in California, where this journey began, are the ones we tell her about when she asks about her story. Being loved so profoundly, by Amy and by all of us, that’s the core message.

And as we share the story of the judge today with the kids over breakfast, we’ll also discuss Elise’s arrival Friday. We’ll talk about Sassy and Poppy being back from Florida, and Joy going home. And the constant parade of loving people continues through this crazy life of ours! 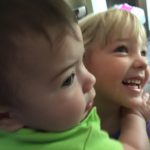 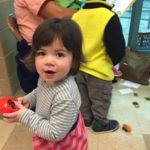 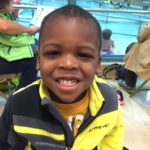 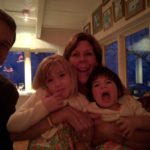 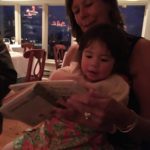 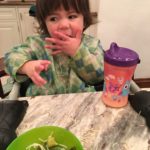 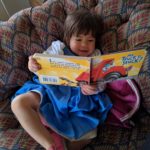 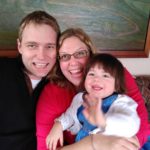 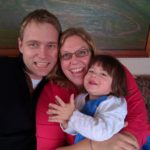 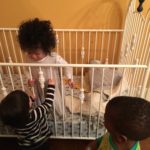 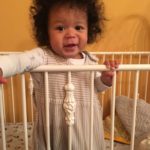 Over the weekend, Joy was the constant for the kids, while Dave and I bounced between the baby and the toddlers. (She is hands down the most amazing person I know.) David and I were at the hospital all day trying to figure out what this baby’s name is. He’s surprisingly hard to capture! He’s the whitest half black baby we’ve ever seen, has the most amazing hair we have ever witnessed on a baby, and has these the calmest temperament I have ever witnessed. Here’s hoping it stays that way! We could do with a child mediator.

The name we came ready to use and did use Friday night into Saturday just didn’t seem right. We erased it from the board, put up some ?’s, and tried to decide whether our other favorite boy name was a good fit. Twenty fours hours to test!

On Saturday night, I shared pictures of Dave at the hospital holding the baby with our kids. Both kids got really quiet and stared long and hard. Remy wasn’t sure he wanted daddy to be holding a baby. He said daddy was holding a rabbit. Not sure where to go with that! We read one of their favorite books, where Tchoupi gets a sister. Tess kept exclaiming,

They got a baby at the hospital, like us!

She seemed really excited. I got a solid nights’ sleep, even after tucking Remy in four times and catching up on laundry. The kids clearly needed some reassurance that we were still present. Going home to see them and talk through the adoption was the right decision.

Back at the hospital, baby boy had visitors! His aunt and cousin came by, followed by two friends of Bianca’s. They all seemed surprised it was Dave’s night at the hospital! They talked about names, multilingualism, that the baby looks like his half-sister, and what our adoptions look like. They were also really curious about Dave’s parental involvement. Dave was very open, and really enjoyed chatting with them.

One visitor was really pushing to have a more open adoption with us, but we know that’s not what Bianca wants right now. Dave did a great job of explaining that we abide by Bianca’s wishes first and foremost. How she chooses to proceed colors our decisions. They seemed to understand. Added bonus? They seem to really like our second name. It must be a winner.

I took Joy to church, hung out with my brother’s family with all the kids for an hour, picked up Joy, then rushed back to the hospital to meet the mom. We were nervous, but excited. She just couldn’t do it, though. My heart went out to her; what does this even feel like in her position?! We walked back up to our room, explaining that if she changes her mind at any point, we would be delighted to meet her. We understand that adoption is complicated for everyone involved, families included. Emotions catch us at the weirdest times, and there’s no way to plan for it. We all have to just ride the wave.

His mom is checking out of the hospital today. So I have one more night at the hospital tonight with this charming boy. I cannot communicate in words how beautiful this alone time with him is, and how excited we are for the paperwork to be signed. It’s a weird push and pull that’s inspiring us to live every precious minute in full.

Brett and Cheri continue to knock it out of the park on the support front. They’re bringing over their baby swing, which will make balancing big versus little kid fun much easier as we transition. (For example, it will be harder for Remy to accidentally knock the baby in the head with his cast if he’s in a swing, versus our travel infant bed!) After the paperwork is signed, we’re really looking forward to spending some time with them. In fact, the rest of our time in Arizona will be really lovely. We are all looking forward to a little relaxation and getting to know our family of five.

Also, we picked a name officially! It suits him, and we can’t wait to share with you. In honor of said choice, both boys passed out cold. We’re all a bit tired!